If ever there is a boxer in need of a career-defining fight, it is Welshman Joe Calzaghe.
After eight years of being
WBO Champion he might finally have it. 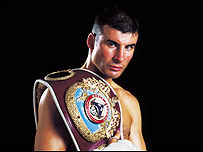 Calzaghe turned professional in 1993 after a glittering amateur career which featured three ABA titles at different weights.
The Newbridge bruiser won the British super-middleweight title in his 14th professional fight and made nine defences before challenging the battle-hardened Eubank for the WBO crown.
Calzaghe served notice of his punching power by flooring the shop-worn Eubank in the opening round and went on to take a bruising encounter on points.

But a series of uninspiring defences followed, leading some to believe the great Welsh hope was nothing of the sort. It transpired Calzaghe had been hampered by an injury to his left hand and he returned to form with an impressive fifth-round knock-out of Omar Sheika in August 2000.

There followed striking wins over former WBC champion Richie Woodhall (TKO 10), undefeated German Mario Velt (TKO 1) and America's Will McIntyre, before a humdinger of a fight against the dangerous Charles Brewer.The dramatic bout at the Cardiff International Arena was shown State-side, and a convincing win on points confirmed Calzaghe's reputation as one of the world's best 168Ibs fighters.


Joe Calzaghe has vowed to make 2006 a year to remember by knocking out Jeff Lacy in their world super middleweight title unification clash on 4 March.

Calzaghe will put his WBO title on the line at Manchester's MEN Arena against his American rival's IBF belt.
"I've been WBO champion for eight years and I've been looking for a big fight all this time," Calzaghe said.
"Finally I've got my opportunity and it's my destiny to unify the titles and show everyone just how good I am."
Calzaghe has reeled off 40 straight wins as a professional, including 17 defences of the belt he won back in 1997 with victory over Chris Eubank.
But Lacy, also unbeaten, has seen off four challengers for the IBF version he acquired 15 months ago, and destroyed former Calzaghe victim Robin Reid before blowing away fellow countryman Scott Pemberton last time out.

(Thanks to C. Bennett for this submission)