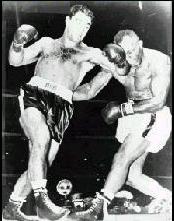 Marciano, Rocky , 1924-69, American boxer, b. Brockton, Mass. His real name was Rocco Francis Marchegiano. Failing to become a professional baseball player, Marciano turned to boxing and won 27 of 30 amateur bouts before he turned professional in 1947. On his climb to the heavyweight title, Marciano became the second boxer ever to knock out (1951) Joe Louis. On Sept. 23, 1952, Marciano won the title by knocking out Jersey Joe Walcott in 13 rounds at Philadelphia. The only heavyweight champion with a perfect professional record, Marciano was undefeated in 49 fights and successfully defended his title six times before retiring in Apr., 1956. Noted for his powerful punching ability, he won 43 of his pro bouts by knockouts. He died in a plane crash.